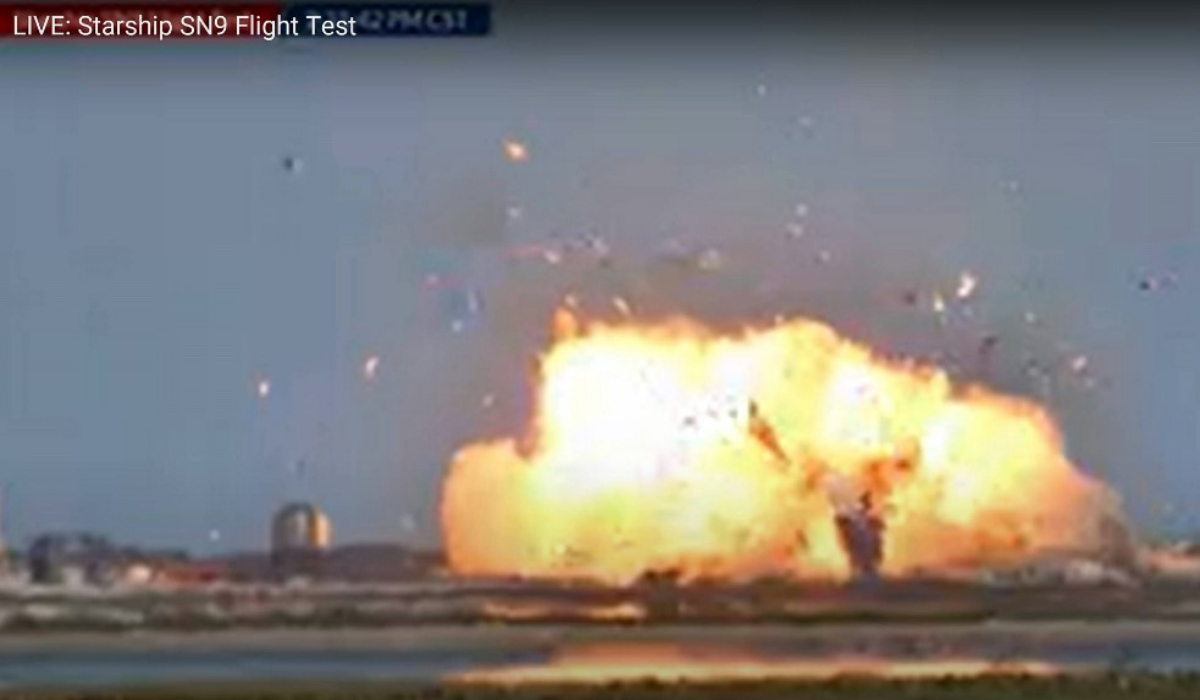 Space Exploration Technologies Corp.’s second test flight of its new deep-space vehicle ended in another explosive fireball after one of the prototype’s engines appeared not to reignite during the landing attempt. The Starship SN-9 lifted off from SpaceX’s seaside launch pad at 2:25 p.m. Tuesday in Boca Chica, Texas, based on live video streamed by NASASpaceflight.com. The rocket then flew to an altitude of about 10 kilometers (6.2 miles).

The spacecraft appeared to be stable as it executed a “belly flip” maneuver before one of its three Raptor engines reignited to reorient the craft for landing. Ignition of a second engine used to slow the Starship for landing may not have performed as expected. No people were on board. A third prototype, SN-10, was parked near the launch pad and didn’t sustain obvious major damage in the fiery landing. SpaceX hasn’t said when that rocket would be ready for a flight test.

An earlier craft, SN-8, slammed into the ground in Dec. 9, igniting a similar fireball. SpaceX conducted the latest test after satisfying conditions set by the Federal Aviation Administration, which said earlier in the day that the rocket maker performed the December flight without a waiver from the U.S. regulator to exceed safety parameters.

The company’s noncompliance prompted the FAA to delay a Jan. 28 test of the second Starship rocket. The decision triggered an angry tweet from SpaceX founder Elon Musk, who accused the FAA of having “a fundamentally broken regulatory structure.” Federal law allows the Transportation Department, which oversees FAA, to impose fines of as much as $100,000 a day for each violation of a launch license.

It also grants the government additional powers, such as revoking existing licenses, subpoenaing records and inspecting facilities. The FAA doesn’t comment on possible pending enforcement cases, a spokesman said. A SpaceX spokesman didn’t respond to a request for comment, according to Bloomberg. The stainless steel Starship was conceived as a versatile, fully reusable craft that can carry 100 metric tons for deep space missions to the moon and Mars. It’s also designed to serve as a hypersonic, point-to-point vehicle to reduce travel times across Earth. Excluding a heavy booster that creates a two-stage system, Starship is 160 feet high with a 30-foot diameter, able to carry as many as 100 passengers. Musk said in October that he’s 80% to 90% confident that Starship will be ready for an orbital flight this year. SpaceX, which is based in Hawthorne, California, plans to fly multiple Starship prototypes from its Texas launch site near the U.S.-Mexico border.